It has been a love-hate relationship with sugar that has defined Robbie McCauley’s experience with diabetes. But it has been Sugar in another form that has helped her towards healing. 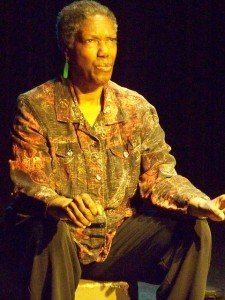 Robbie McCauley, Professor of Performing Arts at Emerson College in Boston, has achieved a career that many would envy. She has filled the roles of performance artist, playwright, director, and educator. Her award-winning work in the theater has been acclaimed as groundbreaking in its unabashed confrontation of issues of race and class during a time when these topics were simply not discussed.

“But even in the midst of all of that,” says Robbie, “the one thing I was not going to acknowledge was my own silence about [my] diabetes. And of course we’re silent about it. No one ever asks, and we all know the shame and blame that can come with it. But one has to speak at some point.”

Growing up, Robbie’s mother always prepared healthy meals, and the family rarely ate junk food or even had dessert. “But I craved candy bars all the time during junior high,” she remembers. “I was sneaking candy, and eating mounds of peanut butter and grape jelly sandwiches on Wonder bread, and what did we know [back then]?” She spent most of junior high and high school feeling utterly exhausted, and unable to participate in sports or be active in any form. It took her a long time to heal from simple ailments that others recovered from easily. And still, her cravings for sugar continued.

Finally, after years of feeling horribly sick, she was diagnosed at age twenty with diabetes during a routine physical examination. By that point, she was desperately ill, and she had to spend several weeks in the hospital recovering.

“It was a trajectory,” she recalls. “And I’m still brittle. It’s a brittle disease, and you do the best that you can. You think you’re all done, and you’ve got it all under control, and then – something happens, and you end up in the ER. But, you have to live your life. You can’t just sit and wait for the next shot. You’ve got to go places, and do things.”

And that she did, moving into a distinguished career in performing arts. Her work has spanned the geographies of United States and Europe, as well as theatrical forms ranging from experimental to avante garde to traditional.

Throughout these years, she came to understand how to control her diabetes better. But she realized that her doctors were failing to ask questions about her feelings towards her illness. And she found that she had no answers, either. “I thought that just ‘knowing’ about diabetes was enough,” she says. But those unasked and unanswered questions lingered, and they troubled her.

She also witnessed firsthand the effect of race, class, and health care access on determining health. “[In my family,] it has been tragic,” she says. “Just tragic. Food was our life. When I got diabetes, I moved away into a more sophisticated environment where I could get help. But I had a younger cousin who passed away [from diabetes], and it was devastating. I felt like I should have been able to do something for her.”

So when she read an article in 2005 about health disparities affecting African-American women, particularly regarding diabetes, something clicked. “When I saw that, the rage just kicked off,” she says. She decided to channel her anger into writing, thinking, “This is material, and I’ve got to give a voice to it.” From this, her one-woman play Sugar was born.

“Most people would like to think of [diabetes] as no big deal. They want to think it’s not as bad as, you know, whichever other disease,” says Robbie. This resistance to the seriousness of diabetes makes it hard to start a dialogue.

Part of the beauty of Sugar is its ability to do just that. Years of running so-called “story circles” with people affected by diabetes informed the writing of Sugar. Now, performances often include “talk-back” sessions. These give audience members the chance to add to Robbie’s own narrative of the crossroads of diabetes, race, and class. People speak and listen to each other. The ongoing sharing of ideas has given Robbie fresh perspective on the illness that has been with her for the better part of her life, even before she was aware of it.

Robbie says that while the process of writing Sugar was healing for her personally, she does not claim any healing element for the audience. “I’m just happy that people listen and think and shift their views,” she says.

But there is no denying the power of narrative to compel people to engage with the topic. “I’m basically telling my story, coming from my own experience and identity, which I have my own thoughts about. But people identify with my story because of the condition, and this makes them very open to having a discussion about it.” And if people are willing to talk, they have taken an important first step towards healing themselves.

Robbie says that it comes back to a certain kind of advocacy that she feels is important. Some of that is the responsibility of organizations, she says. “But I think also on an individual level, people can do more. We don’t know enough about each other. People rightfully get nervous about approaching people, but we need much more of a community or society.” For Robbie, that advocacy takes many forms, from stopping to help a fellow diabetic in need on the street, to tapping into artistic expression to transform perceptions and heal.

Robbie’s relationship with sugar has been complicated, to say the least. It has always been a looming presence, from her cravings as a child to her visits to the ER into adulthood. But with Sugar, she has reclaimed a sense of control – a control which has helped her heal. Both on stage and off, Robbie is using the power of narrative, theater, and art to alter the landscape of the diabetes dialogue.