UnLonely in the Field: NAMI Maine

John Donne’s now-ubiquitous phrase “No man is an island” still holds true today, nearly 400 years after its initial publication. For those living in the largely rural state of Maine, one of the least populous in the country, it’s a particularly poignant line. One in four “Mainers” is affected, in some way, by mental illness, and one organization, in particular, has taken up the challenge of meeting their needs and letting them know there’s an entire community surrounding them.

Since 1984, the Maine chapter of the National Alliance on Mental Illness (NAMI) has offered support groups for those in recovery from addiction, for veterans and for families of those struggling with mental health issues. Today, as the state’s largest and oldest grassroots effort tackling mental illness, NAMI Maine raises public awareness and promotes understanding of mental illness, provides a net of support and resources for those affected, advocates for improved quality of services and trains and oversees a large network of volunteers. 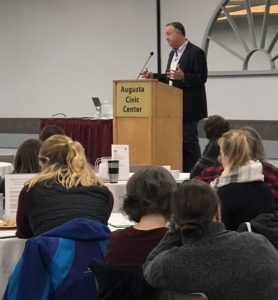 When Dr. Jeremy Nobel, founder of the Foundation for Art & Healing and The UnLonely Project, was asked to provide the keynote speech for NAMI Maine’s 5th annual conference, he felt particularly honored. As a part-time resident of Maine, Dr. Nobel knows intimately of the loneliness and social isolation that can haunt Maine’s small communities, especially during the long winters.

Over the course of his hour-long talk at NAMI Con 2018, Dr. Nobel touched on the health risks of loneliness and the power of creative expression in easing that burden. When we create, he said, we’re more present. When we share, a bit of connection magic happens. And when we receive, we’re learning. We’re growing.

“Someone is going to like you if you show them who you are,” said Nobel.

Perhaps the most immediately gratifying moment in Dr. Nobel’s keynote speech, though, was when he turned the spotlight onto the audience and led them in a haiku writing exercise. When Dr. Nobel asked if anyone would like to share their results – expecting a handful of volunteers – nearly the entire room of participants raised their hands. One by one, attendees read their poems aloud, and the room rose in vocal support of each.

“It was moving to see over 125 people connecting on the topic of loneliness,” said Jenna Mainort of NAMI. “We often do not talk about being lonely, but every member of the audience was engaged and connected. This connection was obvious by the number of people who want to share their short poem.”

If you have a story or tip to share for how you use creative expression to be UnLonely or have an inspirational observation of how you have seen others tackle loneliness by connecting with others through their creativity, we’d love to hear!
Share Your Story