On a crisp, bright, typically encouraging day in September 2001, two planes carrying hundreds of innocent people intentionally crashed into the Twin Towers in New York City – forever scarring the memories of those who survived and those who witnessed the atrocity through the lens of the media.

“While there is no certainty that we have control over future events – we do have some control in the way we react and recover from such disruptive events” said Dr. Jeremy Nobel, founder and president of the Foundation for Art & Healing (FAH).

“The demonstration of creative expression as an effective way to reduce the psychological burden of trauma, especially for children and adolescents, led to the creation of the Foundation,” said Nobel.

” … While the events of 9/11 are the foundation of the experience,” Memorial Museum Director Alice Greenwald shares on the 9/11 museum website, “the Museum does more than facilitate learning. It is a place where an encounter with history connects visitors to the shared human impacts of this event, transforming what can seem like the anonymous abstractions of terrorism and mass murder into a very personal sense of loss.”

“The museum is a living memory to a tragic event that shaped our world history, and the museum itself tells the story of, and is a testament to, resilience and recovery.”

Nobel further points out that work by FAH and others, is helping to establish, evaluate and make more widely available the tools necessary to deal effectively with the trauma associated with these events and others.

“Creating this work helped me release all the stress that I had inside of me,” said Wanda Martinez, 17, of her painting entitled ‘Mourning Sun.’ “I hope this painting helps others, as it has helped me.

Martinez was one of hundreds of school age children who took part in a program set into place by New York University’s Child Study Center to address the immediate traumatic impact of the 9/11 bombings of the World Trade Center to the most vulnerable population: children. 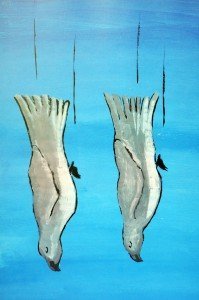 NYU’s Lori Evans, Ph.D., clinical assistant professor in the Department of Child and Adolescent Psychiatry spoke to the challenge presented:

“Right after 9/11 – we were asked to go into some of the affected high schools … and treat trauma in those schools,” said Evans.

“We were trying everything, we had all sorts of therapists and clinicians talking to whomever would like to talk to them … but it was underutilized. What was always used was when kids had something they found accessible,” and that universal connection was through art.

One of the schools the Child Study Center worked with was the Murry Bergtraum High School. Students attending Bergtraum traditionally go on to careers in the business sector. Evans said the artwork created by students there was phenomenal.

Creative expression and the arts have been used in the U.S. since the turn of the 20th century to address the affects of (what is now known as) post-traumatic stress disorder (PTSD) and to contribute to the health and well being of individuals and the community, especially for children, who see a rapid and sustained benefit.

What was striking in the work with students, ranging from elementary through high school, Evans noted, was not only the emotional quality, it was the message that the work was able to convey and the pride with which they displayed their work within the school – and then through the opening of the exhibit at The City Museum of New York.

Children are at a distinct advantage when it comes to art –not bound by the limitations of doubt or negativity – their artistry is often drawn from their innocence and free spirited expression. They are not self-conscious by nature – it is only as they grow older and adult constraints are attached to their creativity do they pull back.

New York Senator Charles Schumer, a contributor to The Day Our World Changed: Children’s Art of 9/11, wrote that we each own a perspective on 9/11 unique from any other – a perspective based on who we are, where we were that morning, and the connections we have to this tragedy.

The children’s artwork in response to 9/11 demonstrates a tremendous range of emotions: sadness, anger, pain, confusion, hope and resilience. 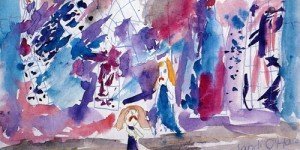 Using pencil, crayon, paint, photos included in collages – the paintings move the viewer from the terrifying violence of the bombings, the challenge of search and recovery, through the introspection of self-portraits, with heroes and helpers along the way.

The work demonstrates a resilience in these children – not to be defined by the destruction and fearfulness of that day in 2001 – and further encompasses an expression of faith, compassion and love – not undone by the senselessness of the terror meant to become instilled in all Americans through the actions of 9/11.

That art was found as a universal communication tool for these children so directly affected by 9/11 is not unique or surprising.  The tool for these children was painting, but poetry, music, photography, writing, storytelling, dance and even cooking are among the many artistic outlets that have been found to provide sustained relief from trauma.

“It was a stress reducer,” said Evans, “it allowed for a conversation amongst the kids, where it didn’t have to be about life or death.”

These seemingly simple expressions through art are central to the theme for healing from traumatic situations and/or PTSD. Whether it’s something as instantly recognizable as the terrorist actions on 9/11, veterans returning from war, meteorological events such as hurricanes, or the daily perversion of domestic violence — creative expression and the arts provide a platform for people and communities as a whole to heal through creative intervention.

“… Whether you are talking Hurricane Sandy or when we had the blackout (the Northeast blackout in 2003), all of those things bring community together,” said Evans, “and I think that art can do that like nothing else.”

The Foundation for Art & Healing