One way of dealing with a terminal diagnosis? Laugh. 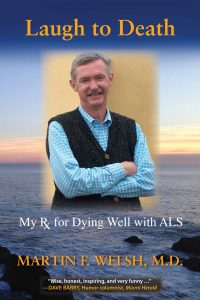 In the spring of 2004, Martin Welsh, MD was diagnosed with amyotrophic lateral sclerosis (Lou Gehrig ’s disease). “As my physical abilities gradually vanished, and having the personality I do, I felt a need to stay busy as time passed. I began writing the “ALS Updates” emails to keep distant family and friends up to speed with the latest news.” Out of these updates, Marty wrote the recently released Laugh to Death: My RX for Dying Well with ALS.

Challenged by this progressively fatal disease, he continued to display his over the top, “damn the torpedoes”, attitude. He practiced medicine as long as the disease allowed. Marty volunteered with the Flying Samaritans going on trips to donate medical services to the poor in San Quintin, Mexico. He played golf until it was impossible to stand up at the tee box. He was proud to raise funds and awareness on behalf of the ALS Association under the banner of Marty’s Marchers at many of the annual ALS walks.

Marty’s story and courage became the subject of much media attention during his final years. His essay “Meaning of Life” was republished in the Los Angeles Times as 100 Things, Leading to a Single Choice and then carried in dozens of papers throughout the country. Marty’s amazing philosophy about facing the end of life inspired two filmmakers to include him in their work about death and dying in a PBS film titled Consider the Conversation: A Documentary on a Taboo Subject.

On Thursday, October 28, 2010, Dr. Martin Frederick Welsh, 56, passed away at his Camino, California home surrounded by his family. Marty is survived by his loving wife Maureen (a long-time friend and supporter of the Foundation for Art & Healing), his beloved children Carey and Kevin, his daughter-in-law, Kristen, his granddaughter, Alexis, and his five siblings: Katie Allen, Melinda, Tony, Greg, and David.

We encourage you to learn more about this amazing man and his journey by visiting laughtodeathmyrx.com.

A note from Marty’s wife, Maureen…

Marty knew he had a tendency toward anger, depression, and loneliness, as he explains in the book.  That’s one of the reasons he wrote The ALS Rules. It was in response to making sure he stayed positive and to buoy himself up and not sink into loneliness and anger. He read these rules faithfully every morning before starting his day.  They are simple and apply to almost anyone or any aspect of life.

Author’s note: Originally written in December 2006, the Rules.  I printed these out in large type, and read them every morning, without fail.